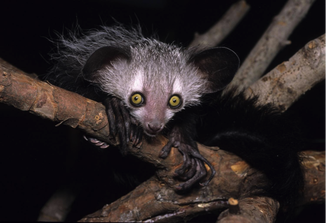 ​Madagascar is home to some of the world’s rarest creatures. One of which is the Aye Aye. This primate is rapidly moving towards extinction firstly due to the fact that this species is native to only the secluded island of Madagascar but also because of an ancient myth spread throughout the natives of Madagascar which classifies it as a demon. Possibly due to the fact that it has large rodent like ears, round wide eyes and it's entire body is covered in coarse black or brown fur. The myth states that if the Aye Aye points a finger at you, you will die; if an Aye Aye is spotted, a villager will die. In both cases, the solution is to kill the Aye Aye

The Aye Aye is an omnivorous animal; it feeds on a variety of fruits, seeds, nectar and other smaller insects. They are the largest nocturnal animal and the only primate which use echolocation. The Aye Aye uses its thin, long, multipurpose finger to tap on the tree trunk and it’s sensitive large ears to search for its grub. Once it finds the unfortunate worm, it tears away at the tree bark using the razor-sharp fingernail on that single finger. Poking its finger in, it widens the hole and its fingernail is used as a hook to grab the worm. Males are known to travel over 4 kilometers at night while hunting for food.

Apart from the occasional large snake or bird who feed on the young, their biggest natural predator is the Fossa. The Fossa is another native Madagascarian, cat-like carnivore. However, predators aren’t responsible for the Aye Aye being listed as endangered but it's the loss of habitat combined with the native folk tale that has caused it.

Who to Support
Duke Lemur Center
​
Return to Current Issue