In Spotlight: Ecology, Economics and Evolution 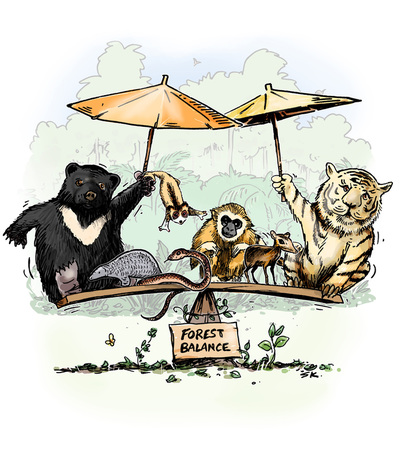 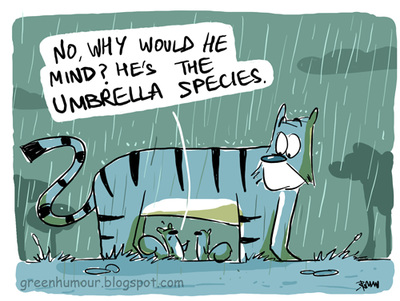 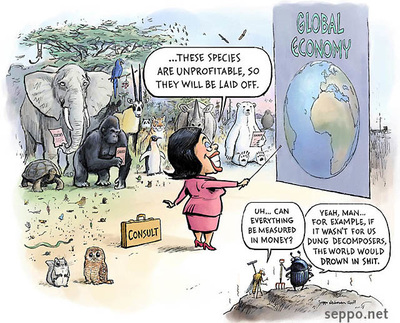 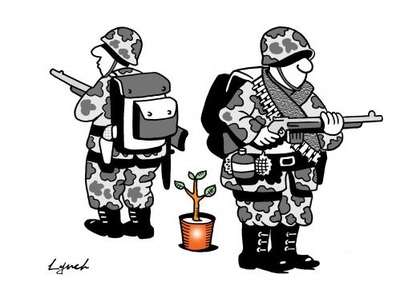 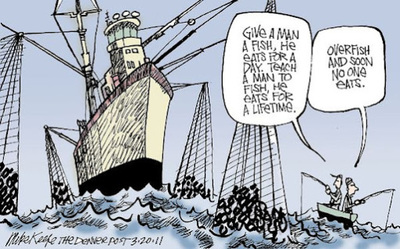 I have been composting my kitchen scraps and yard waste for several years now and as a result have rarely bought any topsoil for my flowerbeds. Although, the real reward from a conservation standpoint comes from knowing I have reduced my carbon footprint, I cannot ignore the small monetary savings that composting offers. My kitchen scrapes, which were destined for the landfill, are transformed into a nutrient-rich organic matter that plants need to grow. Compost contains thousands of microscopic organisms like bacteria, fungi, nematodes and protozoa, which provide essential services for the plants such as nutritional balance, pest control, and aeration during their life cycle. This eliminates any need for synthetic pesticides while significantly reducing the use of fertilizers. Each element in this soil food web plays a critical role in sustaining it. Remove one component and the link is broken, setting off a chain reaction eventually forcing that entire ecosystem to collapse.

Losing one such link cost the Indian government $34 billion in healthcare cost between 1992-2006. The vultures, a bird of prey, provide much of the waste management services in a country, which still struggles with basic sanitation services. A flock of vultures can not only locate a carcass quickly, but also consume it within a few minutes, thus effectively containing the spread of pathogens and disease. The Indian subcontinent lost almost 97 % of the Indian and Slender-billed vultures and 99.9 % of the White-rumped vulture population to a drug called diclofenac, a non-steroidal anti-inflammatory drug (NSAID), that is used to treat livestock. Consuming a carcass that has traces of the drug diclofenac caused kidney failure in vultures. This accidental poisoning has decimated the vulture population and all three species of the vultures found in India are now listed as critically endangered.  With the vultures gone, the feral dog faced no competition for food and hence their population exploded, in turn increasing the risk of disease such as rabies. Between 1992-2006 an estimated 40 million additional cases of dog bites were reported which contributed to the death of almost 50,000 people due to rabies. (Diclofenac was banned for veterinarian use in India, Bangladesh and Pakistan in 2006, however illegal use continues).

Katrina, a category 5 hurricane, is yet another example of what can happen when humans intentionally or unintentionally alter an ecosystem. Katrina cost the United States government 81 billion dollars in losses and approximately 1,800 human fatalities. From 1932– 2005 several engineering projects were initiated around the Louisiana shoreline with the intent of promoting economic growth in the region. Some of these projects included creating shipping channels, laying an extensive network of pipelines, which connect the offshore rigs to land, and building levees and dams to protect communities from flooding. Although these may have benefited the communities in the short term, the long-term implications were devastating for the citizens of Louisiana and its coastline as Katrina made landfall in August 2005. Digging, dredging, and cutting channels through the wetlands allowed saltwater to reach fresh water marshland and killed vegetation in these marshes. On the other hand, manmade dams blocked sediments from reaching the river delta which wetlands critically rely on to sustain, grow, and expand. Prior to the implementation of these projects, the wetlands of New Orleans provided a 16 km wide buffer zone for the coastline from natural calamities such as hurricanes. The roots of the vegetation found in these wetlands not only soak up water and provide erosion control, but the vegetation, by design, curbs storm surge by reducing the height, intensity, and power of the waves as they make landfall. The broken link in this case was the fragmentation of the wetlands, which were a direct consequence of these economic infrastructure projects. You can learn more about the wetlands of Louisiana in this video by United States Geological Survey(USGS).

The above examples give us insight into the scale of economic cost that a country can incur due to the loss of biodiversity, while the table below showcases the huge savings and profits our global markets enjoy when it remains intact. These monetary implications highlight the delicate balance we, humans, share with our planet’s biodiversity. 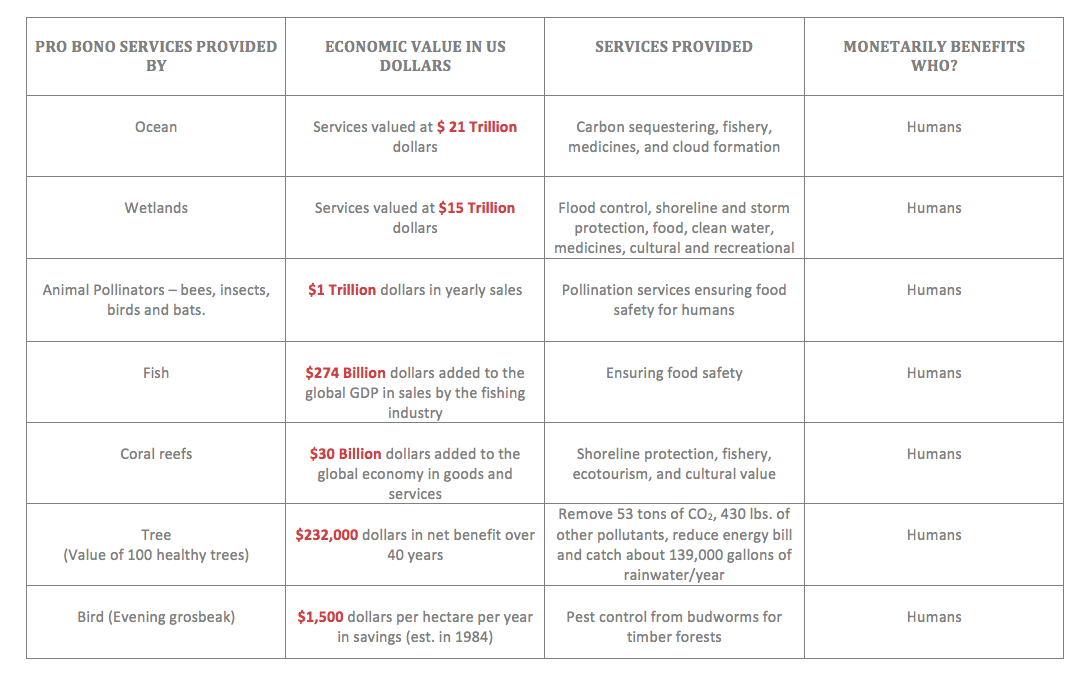 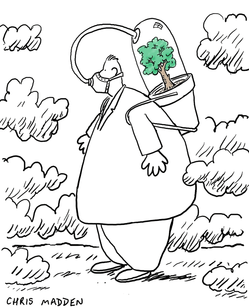 Credit: Chris Madden, UK - Illustration used with permission
​According to the US National library of Medicine the earliest record of use of natural products to treat ailments dates as far back as 2600 BC (Mesopotamia). Documented records show oil extracts from plants were used to treat conditions like cold, cough and inflammation and the very same extracts are used even today. The modern day researchers continue to draw lessons from and rely on nature as they bring to life some of the most innovative medical advances of our time.

Plants, animals and other living organisms have thousands of compounds, which they use for their everyday functions. Some of these compounds continue to evolve through natural selection and are used as defense against predators and disease. These evolutionary improvements, which are perfected over hundreds of years, are preserved in our biodiversity and serve as an encyclopedia of sorts for researchers, to learn from and model medicines on.

To understand the true potential of decoding evolution lets consider snake venom. Evolution has fine-tuned venom for speed, efficiency and precision. This highly potent concoction is made up of dozens of toxic proteins and peptides, each designed to reach a specific vital organ in the victim. Some of these toxic compounds attack the central nervous system, while others cause blood clots, and stop the heart. Every snake has its unique mix of toxic compounds depending on its species, its age and its habitat and therefore it will affect the prey differently. However, the process and the outcome remain consistent; it takes very little, acts fast and causes a multi-system failure.

Interestingly, the very traits that make venom so dangerous also makes it so valuable as it holds the key to some of the most life saving drugs used by millions. "Many snake venom toxins target the same physiological pathways that doctors would like to target to treat a variety of medical conditions."says Dr. Wolfgang Wüster from Bangor University. (Snake venom may be 'drug source', BBC). The widely prescribed drug for hypertension for example is modeled on a compound found in the venom of the Brazilian pit viper, a highly venomous snake. The compound that is responsible for dropping blood pressure to dangerously low levels in its victim (and eventually killing it) is what lead researchers to develop a synthetic version of the ACE inhibitor drug (Angiotensin Converting Enzyme). ACE inhibitor drugs lowers blood pressure in patients with hypertension by dilating blood vessels and allowing blood to flow easily. These drugs have been safely used since the 1970’s. They treat hypertension, congestive heart failure, and prevent kidney failure in patients with diabetes and hypertension.

Venom compounds isolated from other species such as the Gila monster (lizard), the giant Death Stalker scorpion and the Malayan pit viper have also provided effective treatment options in managing conditions like type 2 diabetes, cancer, cardiovascular disease and more. Although teasing out these sophisticated compounds is a very time consuming process they have proven valuable in saving human lives.

Earth is home to millions of species, many of which have not yet been discovered or named. To date scientist have identified 1.75 million species. Even though only a fraction of our biodiversity has been catalogued, it is worth noting that approximately 25% of medicines available to us are either derived from or mimic chemicals found within that catalogued series.

Listed below are some medical conditions and names of medicines that you are probably familiar with. You may be surprised to learn the sources of these cures? I certainly was…

Please move your cursor to one of the images on the slideshow to access the play, pause or  manual options of the slideshow.
Source: Public Broadcasting Services - Nova
Here are some additional links to articles that you might find interesting.

The Telegraph
National Geographic Discover
Who to Support:  Please find below a list of organizations that are working tirelessly to save our biodiversity. I have included a couple of new ones and you may recognize others from past editions. You can support them in many different ways but the fastest way with an immediate impact is your monetary donation. If you have been meaning to pledge your support and just haven't gotten around it you may do so now by clicking on the links provided below. As always thank you for reading!
​
Did you know?
"In some parts of Africa, vultures are targeted by poachers who poison carcasses hoping to kill the birds so they will not circle overhead and signal park rangers. A vulture can spot a dead elephant in less than 30 minutes, but it can take a poacher more than an hour to hack off ivory tusks. No vulture, no warning."
​
~ Vulture Population Wane, Poisoned  by Man, New York Times