This edition is a nod to the ancient Celtic celebration of Samhain (pronounced sow-in), known to us as Halloween. It is celebrated every year on Oct 31st, which is the midpoint between the fall equinox and the winter solstice. It marks the last day of summer, the end of harvest and the beginning of the cold, dreary winter. Legend has it that on this day, the veil between the living and the dead is the thinnest, allowing spirits to cross between the two worlds easily. To ward off ghosts, the Celts participated in several spiritual rituals such as lighting sacred bonfires, wearing animal costumes, and burning herbs. Present-day Halloween celebrations have kept the centuries-old tradition of dress-up and added new ones like trick or treat, pumpkin carving, and enjoying sweet treats. Keeping with the tradition of dress up, this edition focuses on creatures in costumes (or not).
This edition was made possible by the guidance and expertise of Dr. Jason Schmidt, Dr. Emily Coffey, Dr. Rosemary Gillespie, Dr. George Roderick, and Dr. Gustavo Hormiga. I would like to express my deepest gratitude to all of them for sharing their research and/or other research content, answering my questions, providing feedback, and sharing images. (Read more: Bibliography and Acknowledgments)
​The Dare Devil

My home is a kill zone
There is fire on the outside and a death trap beneath
Yet, I live my whole life in the cover of its sheath
I dodge the fire. I have wings, I can fly
I trick my trapper and chew holes on the side.
You ask if it got me?
I wonder what to say
But 65 million years later
I think I am doing okay.
Who am I?

Answer: Exyra semicroce (pitcher plant moth)
Exyra semicroce (pitcher plant moth)
Drawn to the intoxicating fragrance and the invitation to sample nectar, an unsuspecting insect lands on the Sarracenia's pitfall trap, a carnivorous plant. As it travels down the slender vase-shaped leaf (the pitcher), it is unaware that the treasure trail of nectar secretions are baits deliberately positioned to lead it to "the kill zone.” The leaf base is filled with a cocktail of digestive enzymes in which the critter becomes "crunch for lunch." 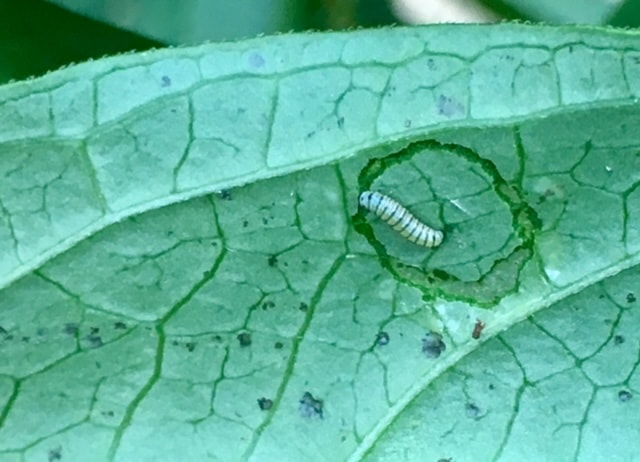 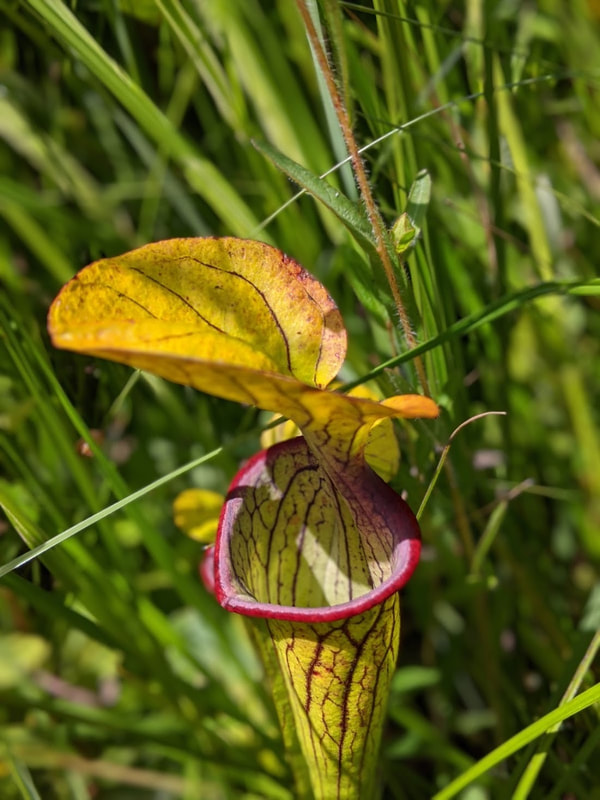 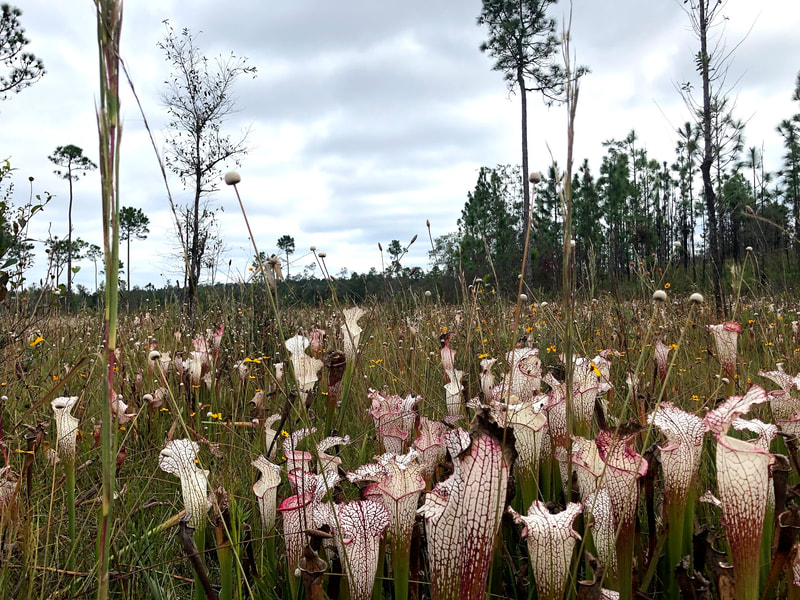 Sarracenia (pitcher plant) growing in the wild
Photo Credit: Dr. Emily Coffey
(Photos used with permission)
Where are the Sarracenia (pitcher plant) and Exyra semicroce (pitcher plant moth) found?
Both the Sarracenia and Exyra semicroce are native to the Southeastern United States. They have coevolved in the longleaf pine ecosystem where naturally occurring fires have been part of the landscape for millennia. Fire keeps the woodland, open, and woody trees from encroaching. Both species have lived and thrived in this fire-adapted community for over 65 million years. 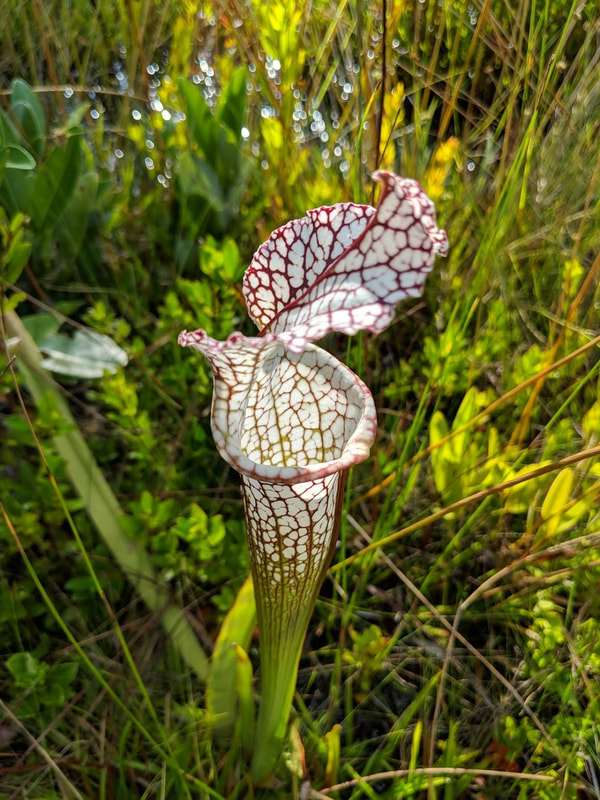 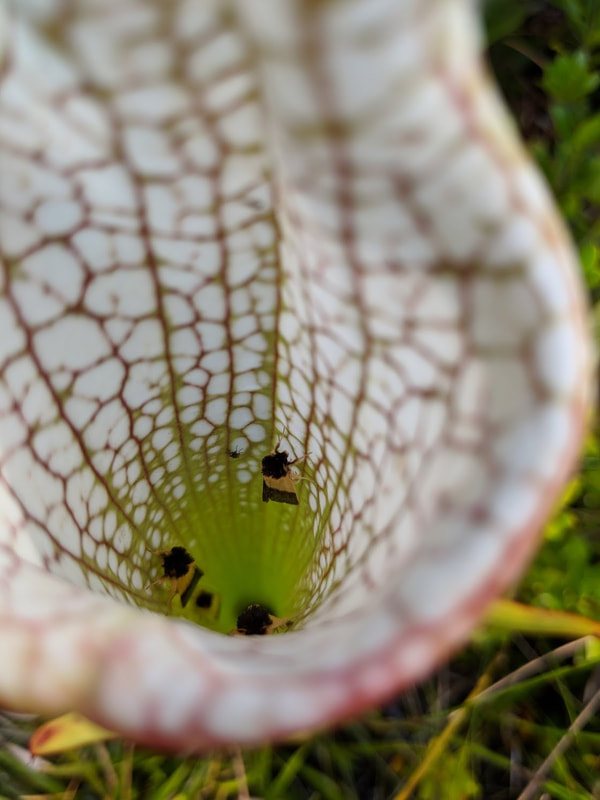 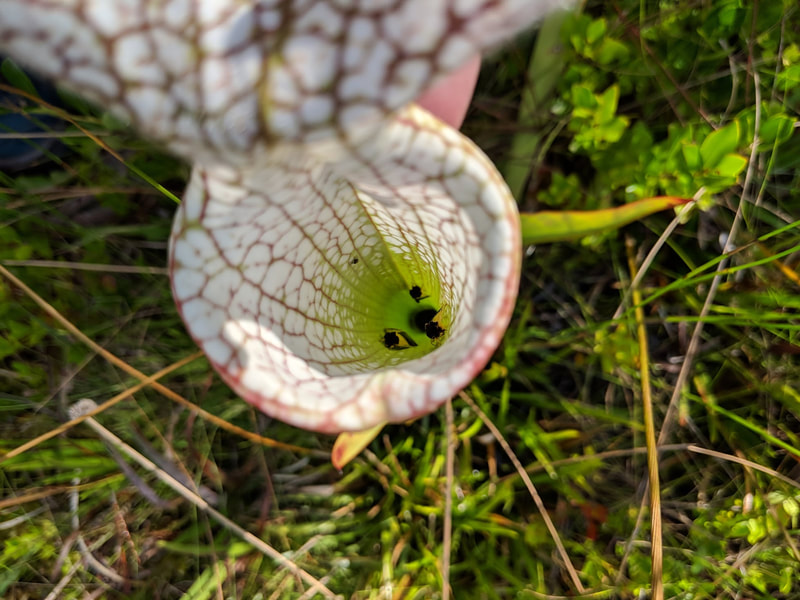 View of the moths and the leaf base with digestive juices
Exyra semicroce (pitcher plant moth) inside the Sarracenia's leaf
Photo Credit: Dr. Emily Coffey
(Photos used with permission)
How does the pitcher plant moth spend its whole life inches away from certain death and yet cheat death? In other words, what evolutionary adaptations help the moth from becoming a meal for the pitcher plant?
The pitcher plant leaf is very slippery on the inside and has downward-facing hair that guides its insect prey to the leaf base filled with digestive juices. Once the insects slip into the narrowest part of the pitcher, the downward-facing hair makes it impossible for them to crawl back out, trapping them forever.

Adult pitcher plant moth:
The adult pitcher plant month escapes this trap thanks to the specialized claws at the end of its legs, which gives them the unique ability to walk inside the slippery pitcher. While the claws provide the grip, the moth also exercises great caution as it enters the pitcher. They never enter headfirst. Instead, they walk backward, much like how someone climbs down a ladder. This method ensures they are always head up, which helps them climb out of the pitcher plant leaf easily.

Larva:
The larva has evolved with more than one strategy to evade entrapment by the pitcher. First, the Sarracenia is the host plant on which the larva feeds during its larval stage. As it feeds on the leaf, it chews holes on the sides and gets out, rendering the trap useless. Second, it uses a silk dragline to pull itself up if it drops down too far. Third, like the adult moth, it also has claws that prevent it from slipping. Finally, they have fleshy projections on their body called lappets that are believed to help the larva stabilize and hold position. The lappets' function is similar to that of a rock climbers' arms and legs when they are in a narrow space.

The larvae have also evolved to minimize predation from other insects by spinning a silk web overhead. The web ceiling seems to protect them from light rain as well.

Egg and Pupa: The eggs are deposited on the leaf wall and the pupa are attached to the wall of the leaf by silk strands. These two life stages have a relatively low risk of falling into the Sarracenia’s trap.

What does the moth feed on?
The adult moth feeds on the nectar secretions on the pitcher plant leaf and the larva feeds on the leaf.

Sarracenia: Degradation and loss of habitat are the greatest threats for Sarracenia. It is currently listed as endangered under the Endangered Species Act (ESA).

Pitcher Plant Moth: The pitcher plant moth is an obligate species (highly dependent on) of the Sarracenia and the wetland habitat. Therefore, loss of the host plant or its habitat will impact their populations' overtime. Along with the aforementioned threats, the moth populations are facing a new risk: controlled burns. As part of the restoration effort to revive the longleaf pine forest, government and non-governmental organizations (NGO's) administer controlled burns. A controlled burn entails cording off large swaths of land and intentionally burning it to simulate the benefits of a natural fire. These burns are often carried out during winters when it is easy to manage fires. However, because the moth overwinters inside the Sarracenia's leaves, entire moth populations are lost to controlled burns.

Note: Natural fires are not as big a risk to the pitcher plant moth compared to the controlled burn because they burn only small segments of the land at a time. Thus, a natural fire would impact only a small percentage of the moth population within a given region. And since natural fires occur during spring and summer, the moth may be at a stage in its life cycle where it could escape the fire by flying away.
Happy-Face Spider
Where are they found?
The happy-face spider is endemic to (found only in) the four Hawaiian Islands of Oahu, Molokai, Maui, and Hawaii. Every population on these islands is genetically and morphologically (in form and structure) distinct.  ​​ 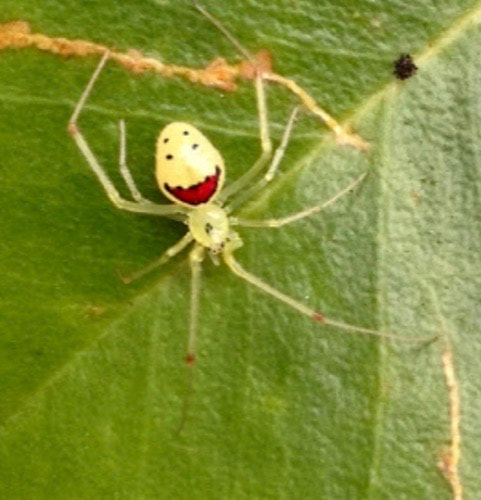 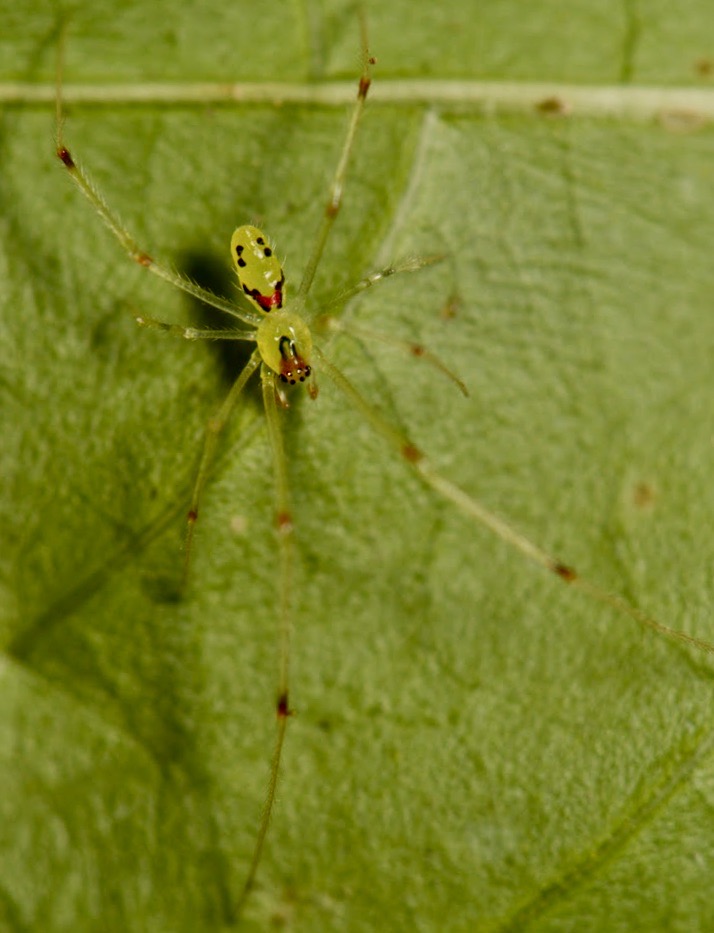 Why are they called happy-face spider?
They get their name from the interesting patterns on their abdomen that sometimes resemble a 'happy face.' A surprising phenomenon that researchers noticed about their coloration is that 2/3 of the spiders within every population are plain yellow, and the remaining 1/3 have a wide range of colors. Dr. Rosemary Gillespie, an expert and professor at UC Berkeley, explained over email that "the colors range from red at the front, red at the back, red rings, red blobs, red line, often with black, and sometimes totally porcelain white." These color variations, she says, are "under genetic control, inherited much like eye color (except with more colors!)"

Does the color variation within each population help the spider in anyway?
Most insects that become casualties of predation minimize their detection risk by developing coloration to camouflage with their natural surroundings. This is known as cryptic coloration. This antipredation strategy is favorable to the prey but not to the predator. To overcome this foraging hurdle, the visually oriented predators have developed a method known as a search image. This technique helps them spot and zero in on their prey (in the cryptic color) quickly.

In the happy-face spider, plain yellow is the cryptic color (blended into the background and hard to find). When the plain yellow spiders become too frequent in a given population, the predatory birds create a search image to spot them quickly. Dr. Gillespie says, “At that point, there is strong selection to be “different” from the “plain yellow” form.” In other words, the divergence from plain yellow coloration to red, black, and white is to disrupt that search image and confuse the birds. At least that is the hypothesis for now. 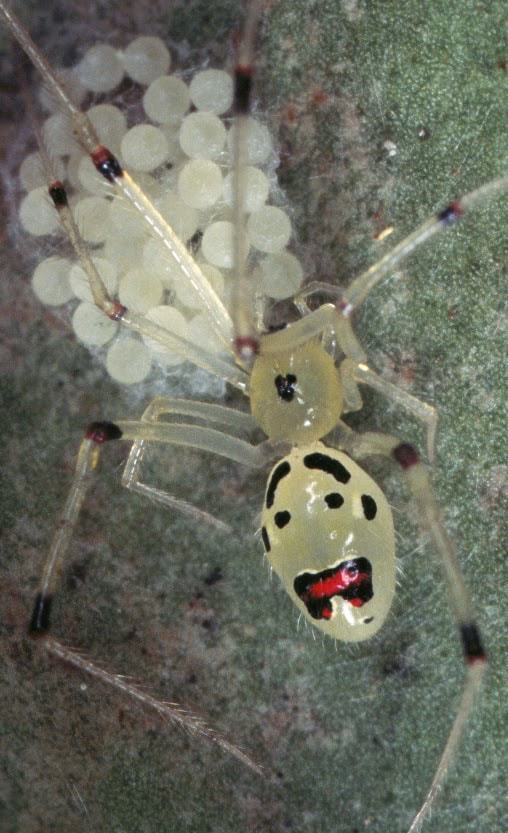 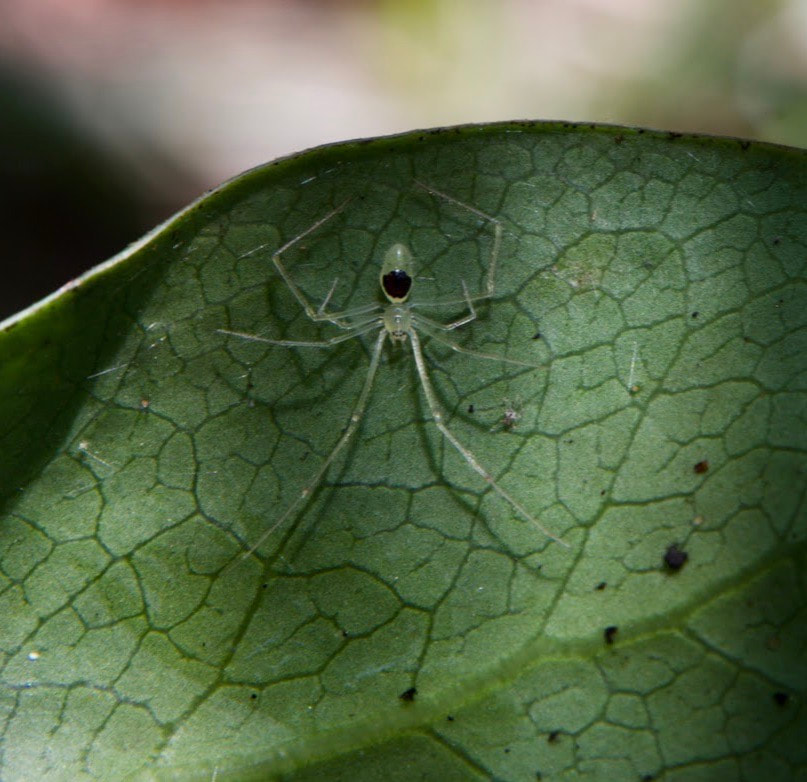 Click on image to enlarge
Happy-Face Spider with color variation
Photo Credit: Dr. George Roderick
(Photos used with permission)
Do the happy-faced spiders have any unusual traits?
Unlike other species, maternal care is quite rare in spiders. Fewer than 1% of spiders exhibit maternal care, and the happy-faced spider is among that small percentage that does. The mothers are known to guard their egg sacs aggressively and have been observed pulling the spiderlings out of egg sac as they emerge. Mothers also actively capture prey and feed it to their young.

Are the happy-face spiders venomous?
Almost all spiders, including the happy face, have venom. Indeed, the happy-face spider belongs to a group of spiders known as the comb-footed spiders, the same family as the famed black widow spider. Luckily, the venom of the happy-face spiders is not dangerous to humans like their relatives, the black widow.
Ogre-Faced Spider
.What do they look like and how to spot one?
These masters of disguise are skilled at blending in with their surroundings and passing off as a dried twig or leaf. They are approximately half an inch to an inch long and have long elongated bodies and thin legs. The upper body is commonly brown while the belly side is a blend of texture and coloration, spidery camouflage. When at rest, ogre-faced spiders hold their legs in a distinct “X’ shape giving the impression that it has only four legs and not eight.

Are they poisonous?
They are considered harmless to humans.

What do they eat?
Not a lot is known, but observations suggest they feed on crickets, beetles, ants, flies and other spiders.
Additional Resources To Explore:
Explore Slide show: There are over 45,000 species of spiders worldwide. They come in a myriad of colors and exhibit complex behaviors. Please click on the slideshow below to view some of the eight legged wonders.
Who to Support: Please find listed below organizations that are working to protect spiders. Follow their links to learn more about their work and the species they protect. ​Please consider supporting their cause by making a donation, signing petitions, volunteering, learning about their work and educating others.