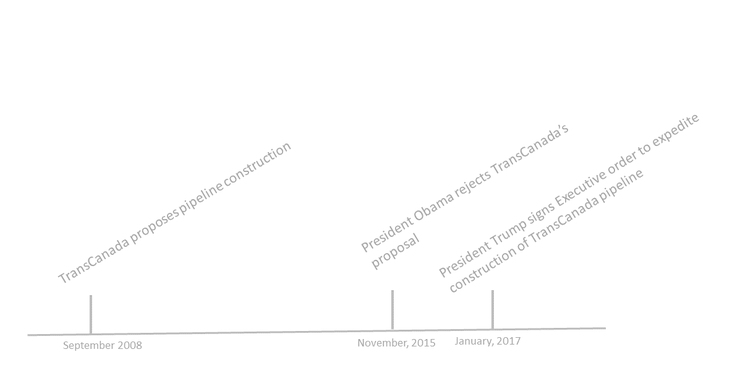 From A Policy Perspective What Does All This Boil Down To?

On November 4, 2015, President Obama rejected TransCanada's application for a permit to construct the crude oil pipeline. The decision came seven years after the original application was submitted in September of 2008. In his announcement, President Obama said, “This pipeline would neither be a silver bullet for the economy - as was promised by some - nor the express lane to climate disaster proclaimed by others”.

So why did he reject the proposal?

As Bruce Huber, professor of energy law at the University of Notre Dame said in an interview on National Public Radio (NPR), this was a symbolic move. It demonstrated environmental leadership from the United States to combat climate change.
​
I couldn’t agree more.

Combating climate change is going to be a monumental task, especially when it comes down to changing our mindset about how we view fossil fuel. We will need real political grit and leadership to propel us away from fossil fuel, a leading contributor of greenhouse gasses. Change does not happen overnight but it happens over time, and in small increments. To that end, the symbolic gesture from political leadership is a precursor to progress before we gather critical mass.

That said, let’s us also consider how this plays out to those who face economic challenges because of loss of employment.  There are no two questions that people out of jobs endure real hardship and their concerns are legitimate. However, endorsing the crude oil industry knowing it will eventually scale back after the construction phase puts people at risk, yet again, of enduring financial insecurity. Strengthening a community requires political leaders to be visionaries who guide their citizens to innovative industries, which show real promise of growth. In other words, a political leader should empower their citizens to financial stability not prey on their economic vulnerabilities for political gain.

Often overlooked, marginalized, and silenced are the voices of the Native American tribes. Their culture is deeply rooted in respecting nature and honoring ancestral knowledge. It is unfortunate that we don’t learn from their values, which teach us to harmoniously coexist with nature but instead we fight them. We must remember that this land rightfully belongs to them and we must respect their traditions and principles. However, not only do we forget that but the United States government also regularly violates the land usage treaty that it has signed with them. Proceeding with the construction of the Keystone pipeline would have yet again violated the treaty because the pipeline crosses tribal land. It would have also failed to acknowledge their concerns of health risks in case of an accidental leak. By rejecting the proposal President Obama took into consideration all their concerns and did what was right for the people and the country.

On January 24th, 2017 President Trump signed an Executive Order which overturned President Obama's decision to reject the construction of the Key Stone XL pipeline.  In doing so the Trump Administration has neglected to address concerns regarding climate change, long-term job security, the Native American land treaty rights and health risks. ​ 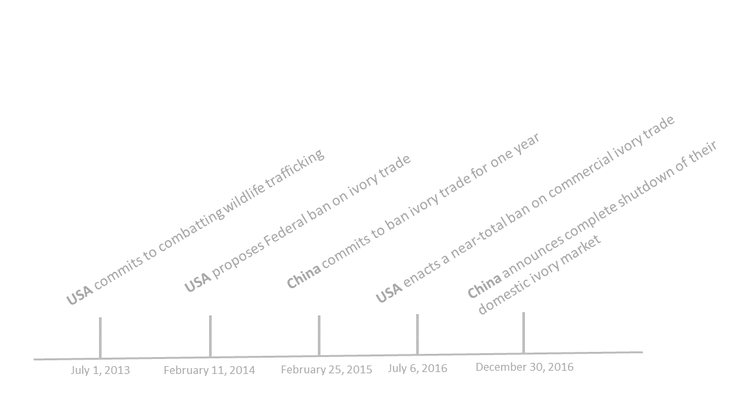 ​
From A Policy Perspective What Does All This Boil Down To?

China and the United States are the two largest consumers of elephant ivory in the world. The demand for ivory directly contributes to the indiscriminate killing of the African elephant by poachers.

The one-off ivory sale in 2008 authorized by CITES (Convention on International Trade in Endangered Species of Wild Fauna and Flora) was a legal sale of government-owned stockpiles of ivory. Even though measures were undertaken to ensure that this sale would not facilitate the reopening of the illegal ivory trade, it inadvertently ended up doing exactly that. There was no way of checking if the ivory came from the legal government stockpiles or from poached elephants after the transaction was completed in 2008. The growing middle-class in China surged the demand for ivory and soon the elephant crises reached a tipping point. 100,000 elephants were killed between 2010- 2012 for their ivory. The reporting of these statistics sparked an international outcry for protecting the species and decisive political action.

As the African elephant poaching crisis escalated the United States was faced with two challenges; first to legislate policy to ensure the survival of the elephants and second to address illegal wildlife trade within its borders.

In 2015, China followed the United States lead to the proposed ban and announced that it will ban ivory imports for a year. Finally, on Dec 30, 2016 China announced a complete shutdown of their domestic ivory market.

Through collaboration, both United States and China were instrumental in enacting policies to protect a species beyond their own sovereign borders. Elephants, a keystone species of the African savannah, play a critical role in safeguarding the delicate ecosystem of the region. To summarize, the legislation achieved what it set out to do, it saved a species from the brink of extinction. However, in my opinion, it went beyond that; it ensured economies on the African continent continued to thrive via eco-tourism. Africa is home to some of the world’s most iconic species, which draws millions of visitors to view wildlife every year. Eco-tourism is a significant contributor to the GDP for many African nations. United Nations World Tourism Organization (UNWTO), an agency within the United Nations, recently published a fascinating paper on the value of wildlife in Africa. Included below are excerpts from “Towards measuring the economic value of Wildlife Watching tourism in Africa.” It provides clear and objective data on what wildlife contributes to regional economies.
​Serengeti - Ngorongoro Circuit, Tanzania
​…“According to a study conducted in 2009, the southern circuit at Serengeti-Ngorongoro receives 300,000 tourists per year on the 300 km stretch between Arusha and Serengeti. The total inbound tourism expenditure generated at this destination is US$ 500 million per year, which is more than half of Tanzania’s foreign exchange earnings from tourism”….
Bird watching in South Africa
..."In 1997, a quantitative study on avitourism to South Africa conservatively estimated that the country received between 11,400 and 21,200 birdwatchers per year which contributed US$ 12 to 26 million to the South African economy (Turpie & Ryan, 1998; cited after Biggs et al., 2011)….. The development of birding tourism has been promoted by community projects supported by NGOs from the tourism sector. Currently, there are more opportunities for small business development along birding routes, which contributes to the creation of jobs for local communities (e.g., local birding guides) and supports conservation. (Biggs et al., 2011).”….​ Read more
Communities where poverty and unemployment are high, are often places where illegal wildlife trafficking is rampant. Items such as elephant ivory, tiger parts, exotic reef fish, along with hundreds of other items are illegally traded all over the world, including within the United States.

Illegal wildlife trade is a lucrative business; INTERPOL estimates it to be a 20 billion dollar industry. Trade in illegal wildlife is funded and operated by an extensive network of organized criminals, the same people involved in other illicit activities such as drug trafficking, trade in arms and human trafficking. The profits generated from these unlawful activities fund civil wars and sponsor terrorism.

Given what we now know about these organized criminals it is evident that wildlife trafficking is not just an environmental issue, but one pertaining to national security and global stability. By enacting the Elephant protection laws in the United States and shutting down ivory markets in China, the world’s two largest markets of illegal ivory trade have impeded the free flow of illegal ivory and cut off funding to these syndicates.
Compare And Contrast
​
Although the two topics, Key Stone XL pipeline and the Elephant protection laws, are completely unrelated policies the table below is intended to draws our attention to look for consistency in approach in drafting and enacting environmental and wildlife policies. Both these policies were enacted under the Obama Administration. 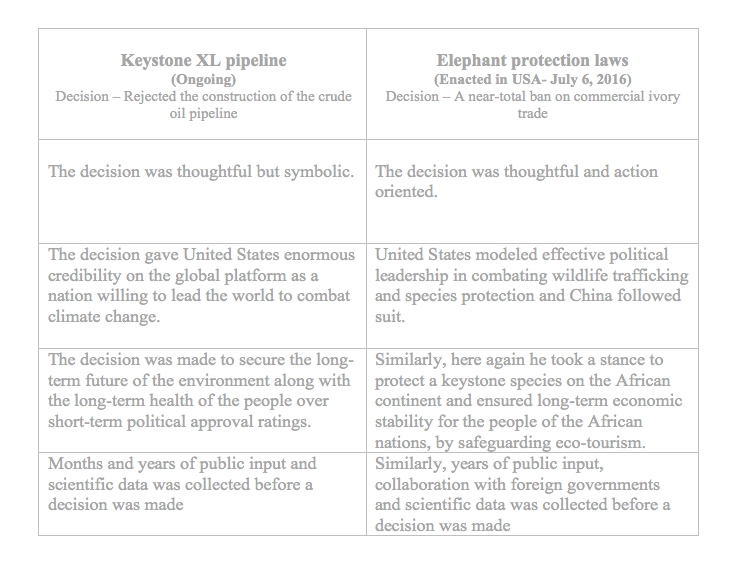 The common thread that emerges from evaluating these two decisions by the Obama Administration is that consensus was reached to ensure the long-term success of the people in the region and the environment. On that note, let us revisit the question; do environmental and wildlife protection policies transcend international borders and have a global impact? The answer is, yes of course they do.

However, if public policies are enacted overnight via Executive Orders of the President without due consideration to scientific data and public input then the long-term survival of the people and the environment is jeopardized and ultimately compromised. Under the present political climate (Trump Administration) there is a real threat of unraveling decades of hard work put forth by conservationist, researchers, and policy makers. If these sound environmental policies come undone it will ultimately impact policies affecting wildlife conservation. Given the fastest mass extinction of species that we are witnessing right now, we do not have the luxury of time to accept any setbacks in wildlife protection laws. It often takes years to formulate, implement, and effectively enforce wildlife protection policies. Laws such as these give law enforcement officials the necessary framework at the national and international front to preserve our biodiversity and bring wildlife criminals to justice. Hence it is imperative that existing wildlife protection laws are protected and new ones are formulated to truly protect nature and wildlife and not be token policies drafted under the guise of economic growth.

To that end, I hope you will join me in neutralizing thoughtless political policies by promoting common sense advocacy for nature and wildlife.
Who To Support

The organizations listed below are environmental advocacy groups that are at the forefront of wildlife and environmental policy legislations. Please take a few minutes to visit their website and pledge your support by  signing petitions, making a donation and staying informed. Please send your monetary contributions directly to an organization of your choice.

The organizations listed below are advocacy groups which focus on the rights of Native American tribes and nature. Please take a few minutes to visit their website and pledge your support by signing petitions, making a donation and staying informed. Please send your monetary contributions directly to an organization of your choice. ​