The Sweetheart Plant
​By: Alyvia V
Age: 16
Atlanta, Georgia USA
Whenever the day of love approaches, we often find ourselves scrounging to get gifts. From chocolates and candies to large bouquets of roses or even fancy candlelit dinners, there are many options to gift to your loved ones for Valentine’s Day. However, there has been one gift option that has been growing in popularity, the Hoya kerrii, also known as the “Sweetheart Plant” or “Valentine Hoya”. The kerrii garners its loving reputation from its heart-shaped leaves that are certain to catch the eyes of those looking to share the love. Moreover, its starlike flowers and succulent nature make it a beloved choice for many looking for a lovely houseplant. 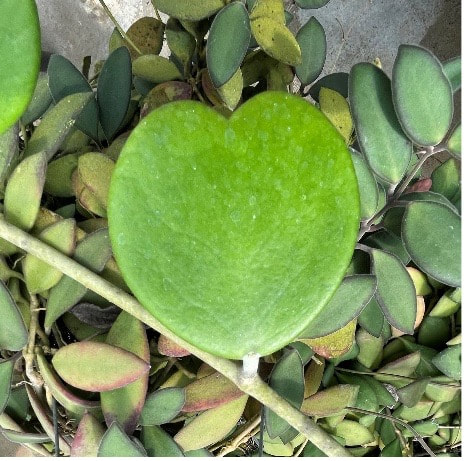 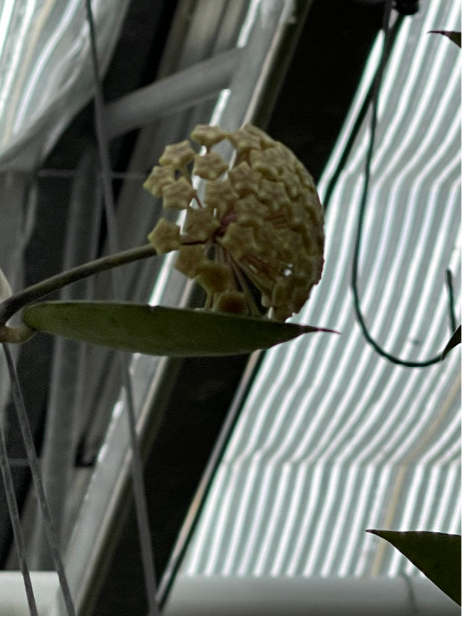 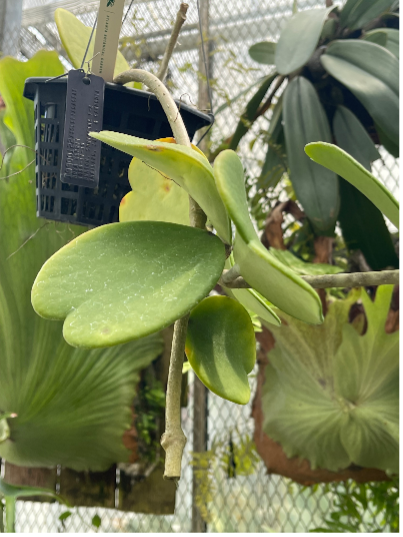 Hoya Kerrii leaf
Photo credit: Alyvia V
As the Hoya kerrii has risen in its sweetheart popularity, interest in collecting and taxonomy research for the plant, as well as those closely related to it, has also risen. The Hoya genus is a part of the Asclepiadaceae subfamily, or, as it is more widely known, the milkweed family, due to the typically white, milky sap that many plants within the family produce or leak when broken. Plants within the Asclepiadaceae subfamily are typically found in both temperate and tropical regions of the world. However, the largest concentration of species is found in the tropics and subtropics. In the subfamily, there are five subcategories with the Hoya genus being a part of the Stapeliae subcategory, which has two divisions. The second division, Ceropegiae, contains the Hoya genus (Kloppenburg).

The Hoya genus is named after Thomas Hoy, a renowned cultivator who worked for the Duke of Northumberland at Sion House, England (Kloppenburg). They are characterized by their vine-like and epiphytic nature. An epiphyte is a type of plant that uses the branches and bark of other plants to grow on but is not parasitic, and Hoyas are just that. They are well known for “climbing” with many species found attached to trees or in low areas as shrubbery on the forest floor. While Hoyas can occur in a wide range of areas of various light intensities and water availability, they do not survive in low temperatures for long periods of time or if there is a big temperature drop. Even though most Hoyas can withstand reasonably bright conditions, they naturally occur and flourish in humid, shady environments (Forster).

Although Hoyas are usually found in humid, tropical environments, they are succulents. The Hoya kerrii exhibits a prime example of this nature. The kerrii’s leaves are not only pleasing to the eye, but their thick, waxy quality serves as water storage for this tropical plant that can live in dry conditions. In addition to the lovely hearts, the kerrii also shares its starlike flowers that bloom from May to August. The buds blossom into small pink flowers. This starlike appearance of five ornate petals is an inflorescence characteristic shared by many in the Hoya genus (Kloppenburg). It is native to the subtropical and tropical regions of Indo-China to Malaysia and typically found in Thailand, Laos, and Cambodia.

I initially discovered the Hoya kerrii during my work duties within my placement in the behind-the-scenes staff greenhouses at the Atlanta Botanical Gardens. While watering, I noticed the thick leaves of the Hoyas, particularly the heart shape of the Hoya kerrii, and a small cluster of stars sticking off of a branch that reminded me of small candies. When I asked my mentors about these sightings, they explained that the stars are the flowers before they bloom and that Hoyas are known as tropical succulents due to their thick leaves for water storage, which fascinated me.

I hope that my love for this sweetheart plant will spread and aid in its growing popularity, which has been a major contributing factor to the conservation, and discovery efforts of the Hoya genus, as many have yet to be discovered.
Bibliography

Kloppenburg, Dale, and Ann Wayman. The 'Hoya' Handbook: A Guide for the Grower & and Collector. Orca Publishing, 1992.
​
Rintz, Richard Edward. The Peninsular Malaysian Species of Hoya (Asclepiadaceae). 1978.
Editor's note
​
Wildlife In Spotlight collaborated with ten students who attended the Summer High School Leadership Summit at the Atlanta Botanical Garden. As part of Alyvia's seven-week program, she had to research, write and present on a plant of her choice. She met with horticulturists, conservationists and other experts to explore the Garden's collections and gather information to write her article. Students were encouraged to select plants that not only interested them, but also had ecological, ethnobotanical, or economic value.