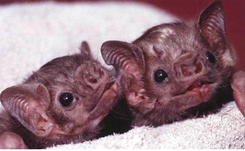 Have you ever wondered what kind of animals are out there, or rather what kind of extraordinary animals were out there? The Bumblebee Bat is not any ordinary bat, in fact, it is the most abnormal bat there is because it has a nose like a pig and no tail!  It is also the world's smallest mammal.With a wingspan of approximately 170mm and a fill length of 29-30mm they had captured the eye of the Thai Biologist Kitti Thonglongya, in 1973. That is simply the reason why they are also known as the Kitti's Hog nosed Bats. They weigh about 2 gms. Their appearance is much like any normal Bat other than the fact that they are as small as the bumble bee. They have the same reddish/brown or grey upper part and have relatively pale undersides. They have wide wings ( well wide for its body) which enables them to hover. Their nose is Pig-like which (no brainier) is another reason why they have been named Kitti's Hog-nosed Bat. An interesting factor on this marvelous creature is the intricate web of skin between their hind legs. It is called the Uropatagium.

They are nocturnal and most active at dusk when they swoop around looking for the buzzing mosquitos or flies. Their habitat is mostly Sai Yok National Park in the Kanchanburi province of Western Thailand around the Teak or Bamboo trees. They have been known to be spotted in Myanmar. They travel in small groups or colonies consisting of 10-100 of these little creatures. They roost high-up in magnificent caves of limestone. One incredible fact on these bundles of action is that when they are sleeping, they spread out the same amount as the next one around the corner in perfect alignment. These caves are found near rivers or ponds in the rain forest. As I said before these busy Bats feed on insects smaller than themselves by either taking them from foliage or capturing them in the air.

Scientists do not know much about the reproduction of these little creatures. But the smartest minds are putting their brains to it. So far, our guess is that they give birth to a single individual somewhere around late April. Deforestation is leading to extinction of these animals. They do not mate with sub-species.

I like this animal mostly because it doesn't harm humans and co-exists very well with the nature around it. And it is very social since it doesn’t harm everything that threatens it.  They live as a tight communities. They are in their own way quiet appealing. These by far are the most interesting small mammals I have known. You could help by donating to wildlife organisations around you and "Give Wildlife a Chance" !

Back to Current Issue or Next article