Thistle Cholla
Delaney R
Age: 16
Atlanta, Georgia USA
The deserts of the world are spectacular, ferocious places that are known for their clear cerulean blue skies. After all, only receiving around 10 inches of rainfall a year, there isn’t exactly much water in the atmosphere that can be used to form clouds (Levy). However, against all odds, the deserts of the Southwest United States are actually filled to the brim with clouds! One catch though, they all happen to be growing on the earth. The resident ground cloud of the Southwest goes by many names: the Thistle Cholla, Hudson Pear, or Cylindropuntia tunicata.  The Thistle Cholla, scientific name Cylindropuntia tunicata, is a cacti native to Southwest America and Northern Mexico (TWC). Custom to the Cylindropuntia family, the Thistle Cholla is a medium, dark green shrub covered in electric white spines.  Small yellow and green flowers bloom over the cactus from mid-spring to mid-summer (TWC). Thankfully, the Thistle Cholla is recognized by the International Union for Conservation of Nature as a species of "least concern" (Goettsch). It grows freely in its native habitat as well as in some deserts of South America, Africa, Europe, and Australia (Bernal).

The Thistle Cholla has many wonderful and interesting features; however, one of the plant’s most attention-grabbing traits is the potential danger and immense pain it could offer a person if they happened to touch it. Although it sounds a bit absurd, Cylindropuntia tunicata reproduces through its distinctive white needles that surround the plant. These needles have tiny hooks at the end of them which attach themselves to the skin of whatever animal or human touches them (Atlanta Botanical). These hooks sink into the skin, and allow the cacti’s seed to be carried and thus spread farther distances (Atlanta Botanical). However, this means that when it is finally time for the needles to come out, all the skin surrounding the needle goes with it. It’s a system that is as fascinating as it is frightening. 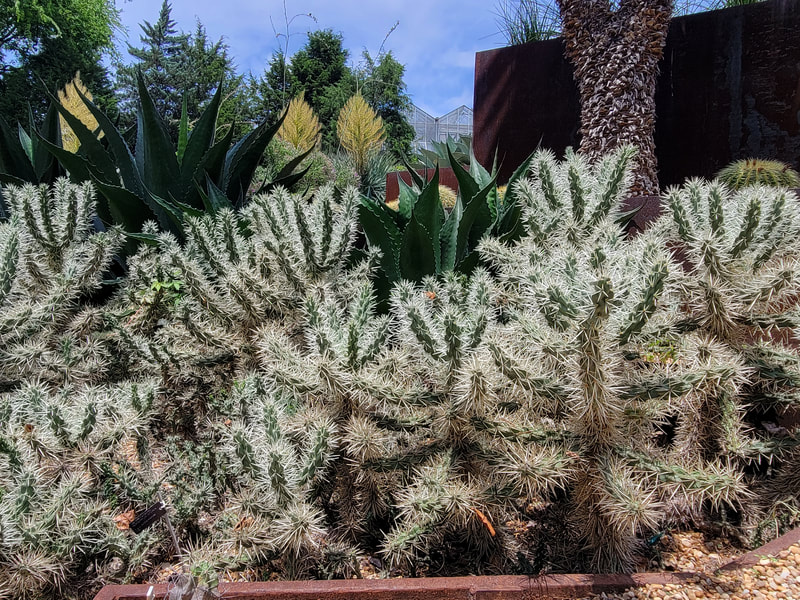 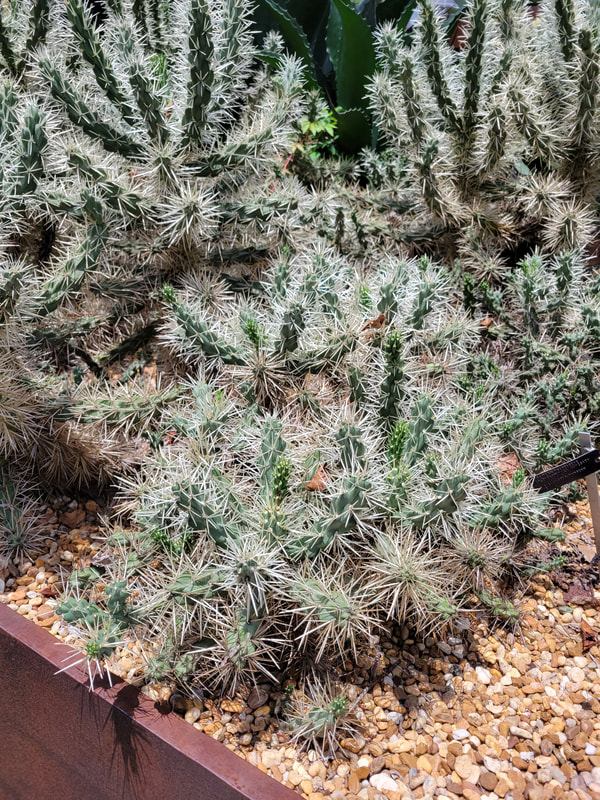 Photo Credit: Delaney R
The beautiful Thistle Cholla has spread across the globe thanks to human travel, and although the plant is clearly stunning, many Aussies have developed a sense of resentment towards the cacti. Unsurprisingly, people don’t really care for this dangerous and potentially painful invasive species that has started to take over their entire country (Fisheries). Farmers have continually expressed their frustration towards the cacti that has been continuously harming their cattle and grazing land (Department of Agriculture). Also, as mentioned before, the seeds spread very easily and the cacti has no predators in the area which makes an extremely favorable combination for an invasive species to spread in an ecosystem.

Nonetheless, be assured that the Thistle Cholla is not completely malicious. In fact, it plays a very important and positive role in its native environment. Native bees find great value in the pollen and nectar of the flowers of the Thistle Cholla during their blooming season (TWC). In addition, the Indigenous people of the region use the plant’s edible buds as a food source as well as for medicinal purposes (Bernal). When Cholla flower buds, typically called ciolim, are dried, it provides a great, low calorie source of calcium (First Nation). The Thistle Cholla can also produce fruit which was commonly eaten in the past by foragers (First Nation). Indigenous people now and of the past have considered the cacti a valuable resource representative of their foraging cuisine.

​     At the end of the day, the Thistle Cholla is an amazing plant. It is an excellent example of a hardy plant that can be destructive when let loose in environments where it does not have predators and/or competition. Even though it has caused a lot of damage as an invasive species in Australia, we can still take time to appreciate the plant’s beauty and charming characteristics. Hopefully, over time, scientists in Australia can manage its spread, so that it can continue to flourish and thrive in a healthy environment without causing ecological harm to those surrounding it. Then, things can finally be as they were meant to be: plant and environment at peace and in harmony.      ​
Bibliography

​USDA NRCS National Plant Data Team. “Cylindropuntia Tunicata (Lehm.) F.M. Knuth.” USDA Plants Database, 2014, https://plants.sc.egov.usda.gov/home/plantProfile?symbol=CYTU3
Editor's note
​
Wildlife In Spotlight collaborated with ten students who attended the Summer High School Leadership Summit at the Atlanta Botanical Garden. As part of Delaney's seven-week program, she had to research, write and present on a plant of her choice. She met with horticulturists, conservationists and other experts to explore the Garden's collections and gather information to write her article. Students were encouraged to select plants that not only interested them, but also had ecological, ethnobotanical, or economic value.